Before we explore solutions for using Core Data in multithreaded applications, we need to know how Core Data behaves on multiple threads. The documentation is very clear about this. Core Data expects to be run on a single thread. Even though that thread doesn't have to be the main thread, Core Data was not designed to be accessed from different threads.

Core Data expects to be run on a single thread.

Before I show you how Core Data can be used across multiple threads, I lay out the basic rules for accessing Core Data in a multithreaded application.

The objectID property is of type NSManagedObjectID and uniquely identifies a record in the persistent store. A managed object context knows what to do when you hand it an NSManagedObjectID instance. There are three methods you need to know about:

The existingObject(with:) method behaves in a similar fashion. The main difference is that the method throws an error if it cannot fetch the managed object corresponding to the object identifier.

The object identifier of a record is similar, but not identical, to the primary key of a database record. It uniquely identifies the record and enables your application to fetch a particular record regardless of what thread the operation is performed on.

It's important to understand that a managed object context always expects to find a record if you give it an NSManagedObjectID instance. That is why object(with:) returns an object of type NSManagedObject, not NSManagedObject?.

You should never share managed object contexts between threads. This is a hard rule you shouldn't break.

It's fine to use one persistent store coordinator, which is accessed by multiple managed object contexts from different threads. This makes Core Data concurrency a little bit easier ... a little bit.

Core Data has come a long way and it used to be a nightmare to use Core Data in a multithreaded application. You still need to be careful when using Core Data on multiple threads, but it's become easier since iOS 6. Apple added a number of useful APIs to the Core Data framework to make your life as a developer easier.

Complex applications that heavily rely on Core Data can run into problems if changes of the main managed object context are written to the persistent store. Even on modern iOS devices, such operations can result in the main thread being blocked for a non-trivial amount of time. The user experiences this as the user interface freezing for a moment.

This can be avoided by slightly modifying the Core Data stack of the application. The approach I mostly use looks something like this. 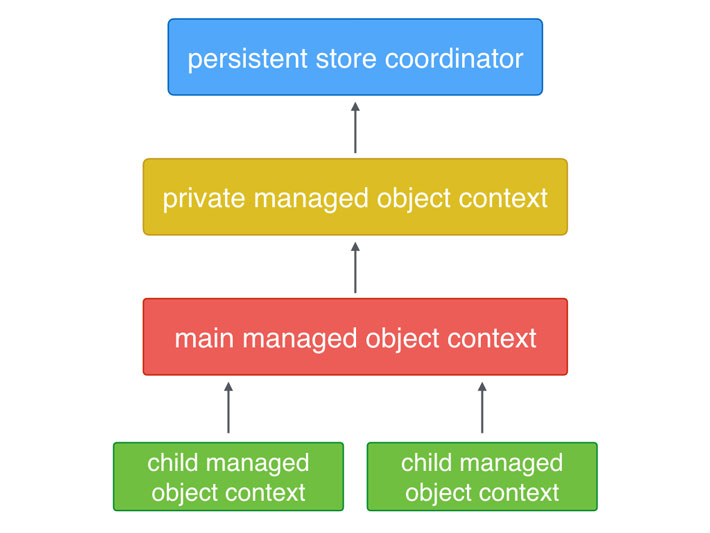 It's time to put this into practice by updating the example we worked on in the previous tutorial. Download or clone the Notes application we created earlier from GitHub and open the project in Xcode. The only class we need to update is the CoreDataManager class.

The next step is updating the implementation of the managedObjectContext property. With the above discussion in mind, the change is easy enough to understand.

To Save or Not to Save

As for the private managed object context, it's sufficient to save any changes when the application is pushed to the background or when it is about to be terminated by the operating system. Open CoreDataManager.swift and add an import statement for the Foundation framework at the top.

Update the designated initializer of the CoreDataManager class, init(modelName:), as shown below.

In setupNotificationHandling(), we add the Core Data manager as an observer for two notification types:

The saveChanges(_:) method you see below is an internal instance method of the CoreDataManager class that:

The perform(_:) method ensures the closure we pass it is executed on the dispatch queue of the managed object context. In other words, we are guaranteed we are playing by Core Data's concurrency rules. The NSManagedObjectContext class also defines performAndWait(_:). The only difference with perform(_:) is that performAndWait(_:) executes the closure synchronously hence the method's name.

Because the save() method is a throwing method, we wrap it in a do-catch statement. Also note that we only invoke save() if the managed object context has any changes. We don't want to waste resources if there are no changes to save.

Don't worry if you are confused by the perform(_:) and performAndWait(_:) methods. We revisit these methods in the next tutorial. We also cover concurrency in detail in Core Data Fundamentals.

Even though concurrency may seem to be an advanced topic, it isn't. Every developer working with Core Data needs to know about concurrency. In Core Data Fundamentals, we further explore concurrency by taking a look at child managed object contexts and you also learn how to safely perform operations in the background.

Keep in mind that a sudden crash of your application results in data loss if you apply this approach. Any changes that are not pushed to the persistent store coordinator when the application is unexpectedly terminated are lost.

You could adopt an alternative approach by saving changes in the private managed object context at regular time intervals or when you know the user isn't actively using your application. This depends on the type of application you're creating.

Now that you know what Core Data is and how the Core Data stack is set up, it's time to write some code. If you're serious about Core Data, check out Core Data Fundamentals. We build an application that is powered by Core Data and you learn everything you need to know to use Core Data in your own projects.