How To Generate Code Coverage Reports In Xcode With Slather

Now that you know how to enable code coverage in Xcode, you may want to export the test results or generate a report you can share. Even though Xcode currently does not offer this option, nothing stops you from using the data Xcode generates.

A few months ago, I came across a gem that recently added support for the code coverage data Xcode generates. I am not joking when I write that Slather is a gem, a Ruby gem to be precise. You can install Slather through RubyGems by executing the following command:

Alternatively, you can add Slather to your project's Gemfile and run the bundle command.

As a test, download the project we created in the previous tutorial from GitHub and open it in Xcode. Code coverage should already be enabled for the Covered scheme. 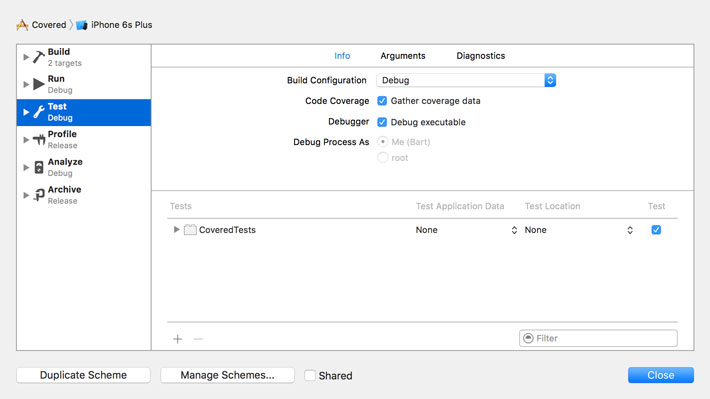 Run the test suite by choosing Test from the Product menu or by pressing Command + U. Even though Xcode collects a lot of code coverage data, only a fraction is displayed in the Reports Navigator. Xcode does not show what percentage of the code base is covered by the test suite, for example, a metric you can use to keep track of the test suite's coverage over time.

Fortunately, we can obtain this information through Slather. Open Terminal, navigate to the root of the project, and execute the following command:

Slather generates the following output for us:

As you can see, Slather gives us a more detailed report with metrics per file. You can also generate an HTML report by using the --html option. 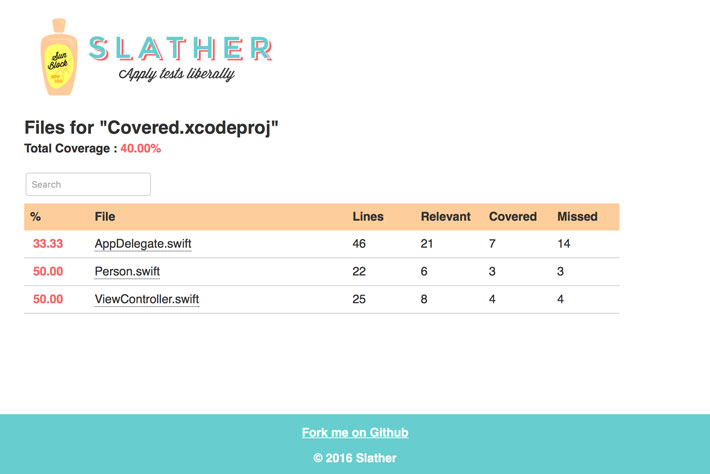 Complex projects require more configuration, but Slather has you covered. You can optionally add a .slather.yml file to the root of your project to further configure Slather. The extension of the configuration file hints at the format Slather expects, YAML.

If you run slather from the root of the project, Slather reads the configuration of .slather.yml and uses it to generate a test report.

I was very happy to discover that Slather enabled me to export Xcode's code coverage data to the Cobertura format. My hope is that Apple adds native support for exporting code coverage data in a future version of Xcode. That would make test results much more useful for more developers.