How To Manage Dependencies With CocoaPods

CocoaPods is a dependency manager for Cocoa projects. There are a handful of alternatives, such as Carthage and the Swift Package Manager, but CocoaPods is the most popular one. CocoaPods makes managing dependencies easy and transparent.

In this episode, you learn everything you need to know to get started with CocoaPods.

CocoaPods is written in Ruby and distributed as a gem. Gems are best installed using RubyGems, a package manager for Ruby. Ruby and RubyGems should already be installed on your machine if you're running a recent version of macOS.

Depending on the configuration of your machine, you need to prefix this command with the sudo command.

I usually advise people to use a version manager for Ruby, such as RVM or rbenv. I have used both and have settled with rbenv. Both tools make it easy to switch between Ruby environments and they don't require you to use the sudo command to install CocoaPods.

Execute the pod --version command to make sure the installation of CocoaPods was successful.

At the time of writing, CocoaPods 1.4.0 is the latest stable release of the dependency manager.

It's time to find out how CocoaPods can help us with Cocoa development. Open Xcode and create a new project based on the Single View App template. 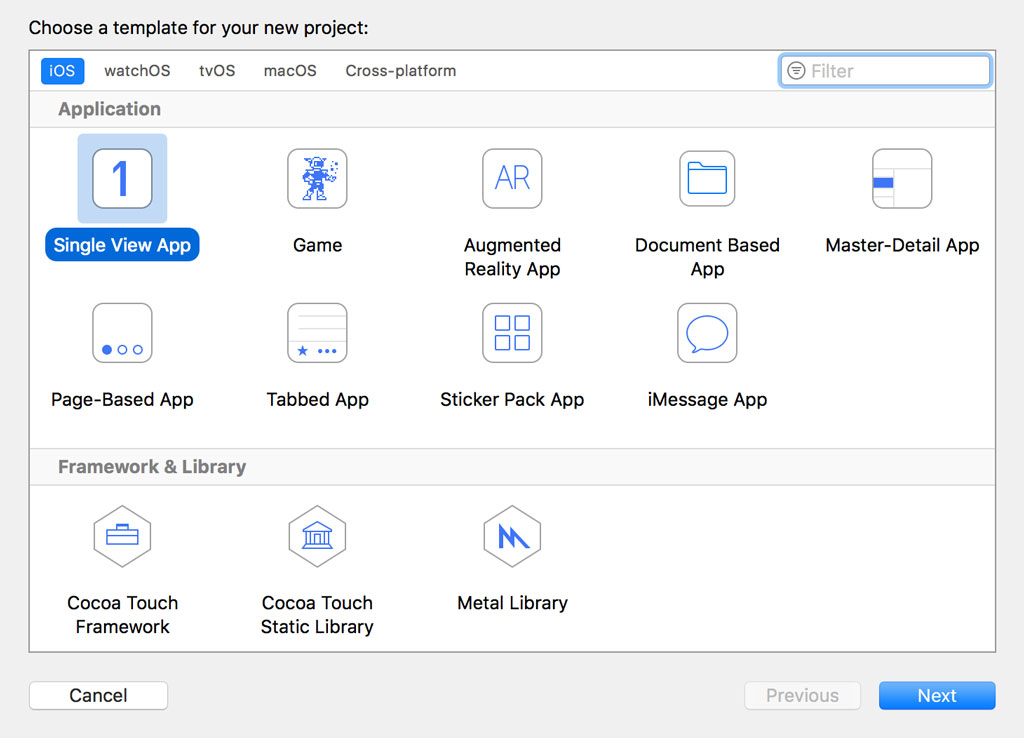 Name your project and set Language to Swift. 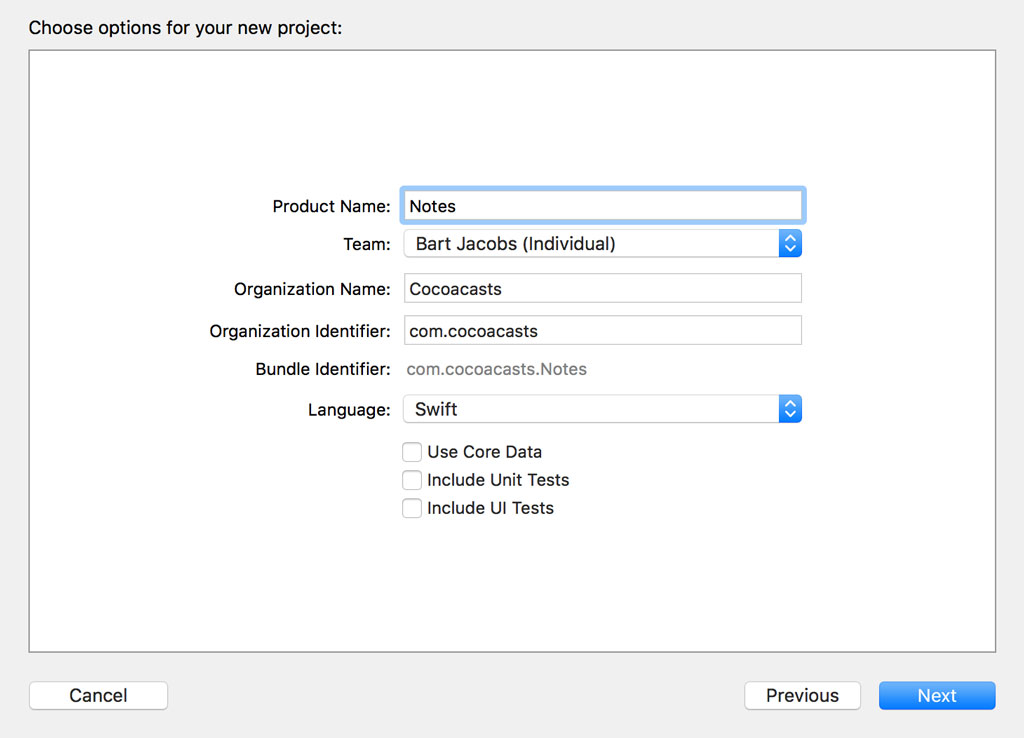 Setting Up the Podfile

The beauty of CocoaPods is that you list the dependencies of your project in a central location, the project's Podfile. CocoaPods refers to a dependency as a pod hence the name Podfile. Because CocoaPods took inspiration from Bundler, the syntax and format look similar to that of a Gemfile.

You can manually create a Podfile with a text editor or execute the pod init command at the root of your Xcode project.

This command creates a Podfile at the root of your Xcode project. Open the file in your favorite text editor. I am using CocoaPods 1.4.0 and this is what my project's Podfile looks like.

The syntax of the Podfile may look foreign if you're not familiar with Ruby. Don't worry, though. You don't need to understand a word of Ruby to use CocoaPods. The CocoaPods documentation is excellent.

In Ruby, a block is a chunk of code that start with the do keyword and ends with the end keyword. This is similar to the opening and closing curly brace in Swift and Objective-C.

By using a target block, we can define the dependencies for the corresponding target of the Xcode project. Within the target block, we encounter a few more comments and a special attribute.

Because we don't specify a version for Fabric, CocoaPods will use the latest version that is compatible with the platform and deployment target we specified earlier.

For Alamofire, a networking library, we explicitly set the version to 4.6.0. We also specify the version of CocoaLumberjack, but we use the ~> symbol to indicate that CocoaPods can use any version starting from 3.4 and ending at 4.0, excluding 4.0. The ~> symbol is very useful if you want to update a dependency, without accidentally installing a version that introduces major or breaking changes.

There are several other symbols you can use to specify the version of a dependency, >, >=, <, and <=. Their meaning isn't difficult to understand.

Even though you don't need to understand every step of the process, it's useful to have an idea of what's going on. CocoaPods maintains a list of every dependency available through CocoaPods and it keeps a local clone of that list on your machine. You can find it at ~/.cocoapods/repos/master. Before it installs the dependencies, it pulls in any changes from GitHub to make sure the list is up to date.

CocoaPods creates a Pods project and a workspace in which it places your project and the Pods project. Note that CocoaPods tells you to use the workspace, Notes.xcworkspace, from now on. If you don't, you won't have access to the dependencies you installed through CocoaPods.

This is what the project folder looks like after running the pod install command.

Fire up Xcode and open Notes.xcworkspace, the workspace CocoaPods created for you. Notice that the workspace contains your project as well as the Pods project. 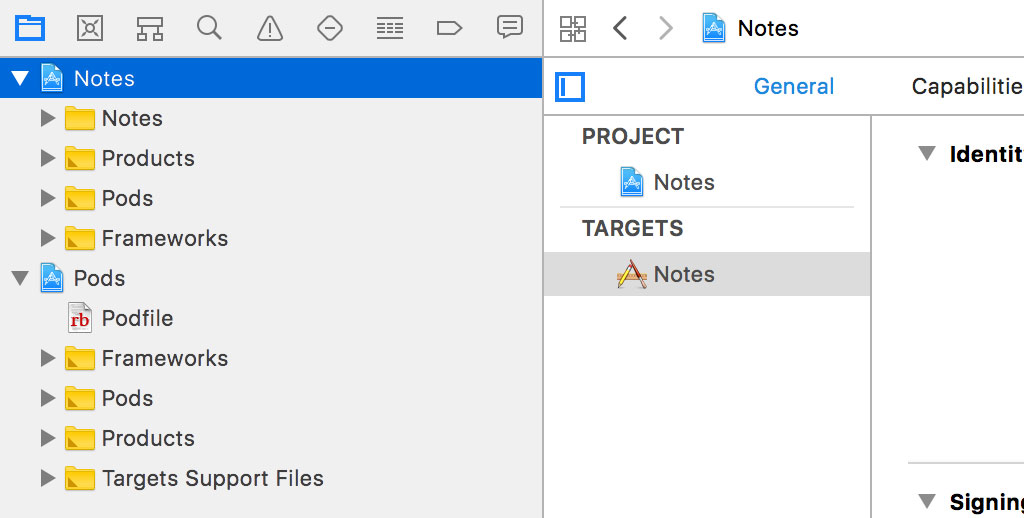 This is one of the features I enjoy most about CocoaPods. It clearly separates your project from the project's dependencies. In addition, CocoaPods configures your project based on the needs of the dependencies you listed. It just works ... well ... most of the time.

Build the project to make sure you don't run into any errors or warnings. Depending on the version of CocoaPods you're using, you may need to update the project's settings.

In ViewController.swift, add an import statement for the Alamofire library and fetch the CocoaPods logo in the viewDidLoad() method of the ViewController class.

It's a rough implementation, but it illustrates that we have access to the Alamofire library we included using CocoaPods.

Another marvelous feature of CocoaPods is the ease with which you can update dependencies. Before CocoaPods was around, you'd have to download and update your project's dependencies manually. Updating dependencies with CocoaPods requires two steps:

Update the project's Podfile by removing CocoaLumberjack from the Podfile and lowering the version of Alamofire.

Open Terminal or iTerm and run pod update to update the project's dependencies.

CocoaPods updates Alamofire to version 4.5.1 and it removes CocoaLumberjack. That's all it takes to update dependencies with CocoaPods. 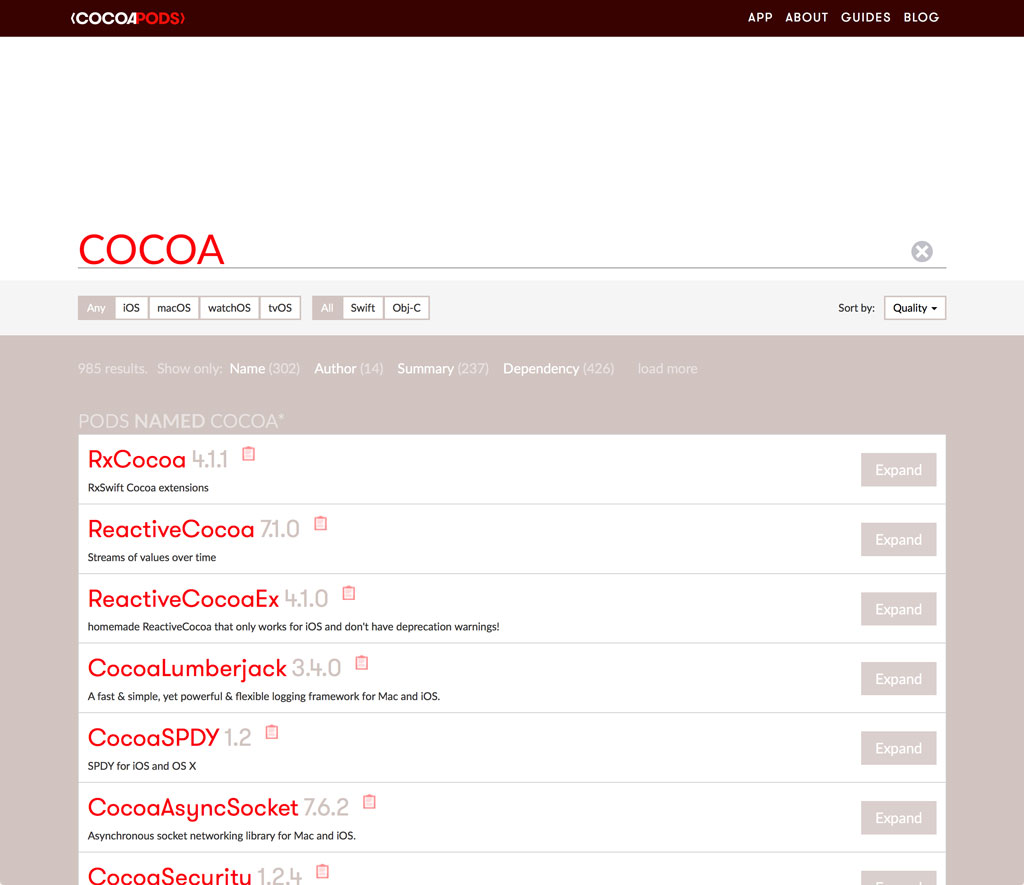 We only covered the basics in this episode. You're now able to integrate CocoaPods in your development flow. CocoaPods has a lot more to offer, though.