Why I Love Model-View-ViewModel

by Bart Jacobs in Model-View-ViewModel

The first programming language I picked up was PHP and, since it was my first experience programming, I immediately loved it. At that time, I had no idea what object-oriented programming was. The result was a lot of spaghetti code that did something.

Maintaining spaghetti code is a nightmare. It may be fine for a one-off script when you are short on time, but for software development you need structure. Later that year, I discovered object-oriented programming, which was still in its infancy for PHP at that time. That was another revelation and I was immediately hooked.

The years after I learned Ruby and JavaScript. Learning a new language is a lot of fun. Shortly after buying my first Mac, I picked up Cocoa and Objective-C. This was before Apple introduced the iPhone. The Model-View-Controller pattern was another revelation. It felt natural and a great fit for Cocoa applications.

But MVC Didn't Cut It

Even though the Model-View-Controller pattern is a widespread pattern for application development, it isn't perfect. Apple's implementation of the MVC pattern falls short and is often too limiting.

It was after the introduction of Swift that I heard about the Model-View-ViewModel pattern. I was reluctant to learn yet another pattern that promised sanity in software development. I had heard that before. But at some point, I gave it a try in a small project and I am glad I did.

In a project built with the MVC pattern, you are often faced with the question which code goes where. Code that doesn’t fit or belong in the model or view layer is often put in the controller layer. This inevitably leads to fat controllers that are difficult to test and manage.

By adding view models to the mix, MVVM presents a better separation of concerns. The view model translates the data of the model layer into something the view layer can use. The view controller is no longer responsible for this task.

The responsibilities of your view controllers are reduced to controlling the interaction between the view layer and the model layer, glueing both layers together.

The view model provides a transparent interface to the view controller, which it uses to populate the view layer and interact with the model layer. This results in a transparent communication between the four layers of your application. 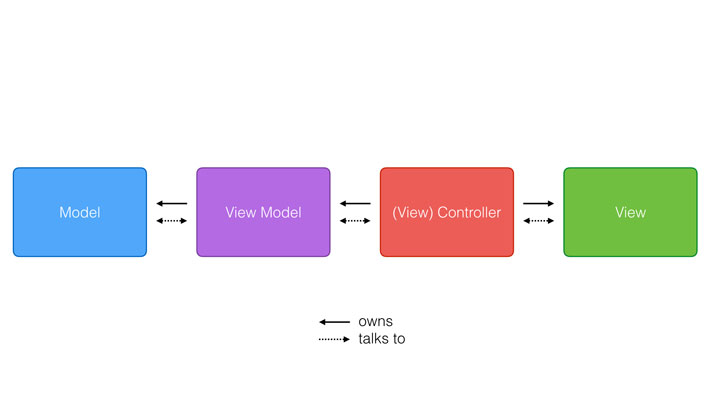 A Change of Mindset

Swift has accelerated the adoption of the Model-View-ViewModel pattern. I use MVVM in every new project I start. It has changed the way I write and think about code. Believe it or not, that is probably the most important benefit of adopting MVVM.

Stop using your view controllers as dumps and build robust, scalable applications that are easy to test and maintain. Learn more about the MVVM pattern in Mastering Model-View-ViewModel With Swift. You won't regret it. I promise.