A magic number is a number that is used in code without much meaning due to the lack of context. Magic numbers are considered an anti-pattern because they make code harder to read, understand, and maintain. Refactoring code that uses magic numbers is also more risky and can be time-consuming.

What happens if you make a typo? The compiler won't complain because it doesn't check that the name you pass to the initializer matches an asset in the asset catalog. If you make a typo, the initialization fails silently and the application most likely renders an empty image view. Bugs like this can live in an application for quite some time before they show up on your radar.

Let's take a look at another example. The identifier of a storyboard segue is a string. You define the identifier of the segue in the storyboard and reference it in code. This seems like another valid use case for string literals. The repercussions of a typo can be more dramatic in this scenario.

We can use the Segue enum in the prepare(for:sender:) method, eliminating the need for string literals.

You may argue that we moved the string literals from the prepare(for:sender:) method to the Segue enum. That is true, but we no longer need to worry about typos in the prepare(for:sender:) method. The string literals are defined in a single location, the compiler ensures we don't introduce typos, and we get auto-completion for free. We can take it one step further, though.

Let's revisit the Segue enum. We define the raw values of the Segue enum to be of type String. We no longer use static constants. Each segue is defined by a case. The raw value of the case is the identifier of the segue.

The added benefit of this solution is that we can switch on the Segue object. The switch statement no longer needs a default case and the compiler throws an error if we forget to handle a segue we should handle.

We can use a similar solution for creating a UIImage instance from an asset in the asset catalog. A more scalable solution is to use a solution like SwiftGen. SwiftGen inspect the project's resources and generates the required code every time the project is built.

This has a number of benefits. Let me illustrate this with an example. I won't cover setting up SwiftGen in this episode. I already installed and configured SwiftGen for this project. We can leverage the code generated by SwiftGen to update the imageForIcon(withName:) method. SwiftGen generated an enum with name Assets. The Assets enum defines a case for each asset in the asset catalog. We create a UIImage instance through the computed image property. That's it.

What happens if we remove an asset from the asset catalog? Because the generated code is updated every time the project is built, the compiler throws an error. We are notified that the project uses an asset that is no longer present in the asset catalog. This is useful for detecting missing assets, but it is also useful to clean up resources without running into surprises. 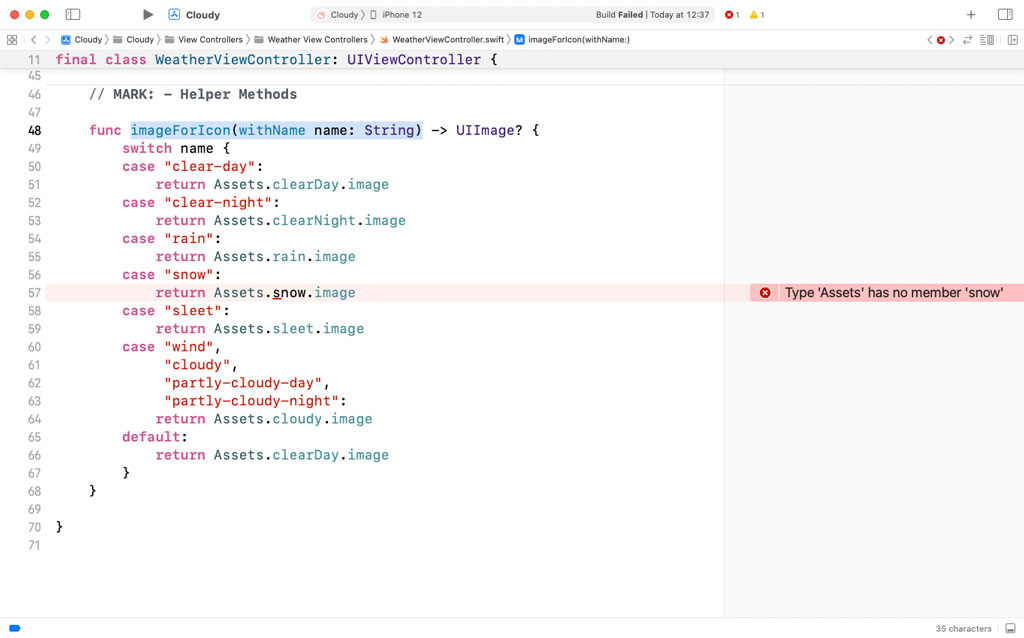 SwiftGen supports a variety of resources, including asset catalogs and localizable strings. You no longer need to worry about typos and auto-completion makes it quick and easy. You can drastically reduce your use of string literals with a tool like SwiftGen.