How to Use a Capture List to Break a Retain Cycle

If you've been paying attention, then you may have noticed that we haven't resolved the strong reference cycle of the Device class. Remember from earlier in this series, this is what the Device class looks like.

We created an instance of the Device class, assigned it to a variable, and set the variable to nil. Setting device to nil doesn't result in the deallocation of the Device instance. 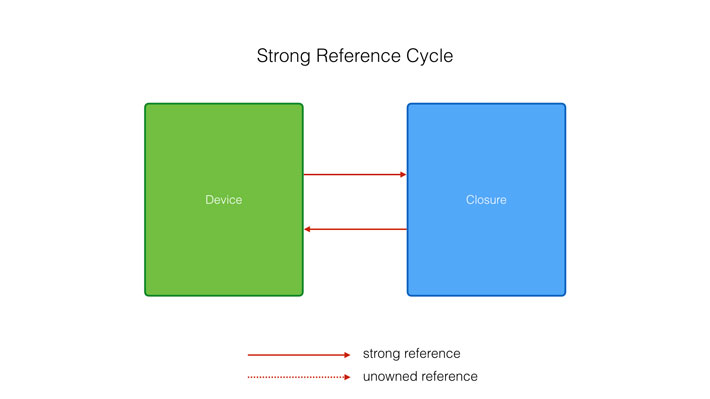 Closures are powerful and versatile, which is in part due to their ability to capture values from the scope in which they are defined. If you'd like to learn more about closures and capturing values, I recommend reading the chapter on closures in The Swift Programming Language.

When a closure captures a value from its surrounding context, Swift is responsible for managing the memory for these values. But as I mentioned earlier, there are times you need to give Automatic Reference Counting a hand. Let's revisit the summary property of the Device class.

If you've read the previous articles of this series, then you probably know how we can break this strong reference cycle. We need to make sure the closure doesn't strongly reference self, the Device instance. But how can we do that?

You can use commas to separate multiple pairs. You already know and understand the unowned keyword. By capturing self as an unowned reference, the strong reference cycle is broken. 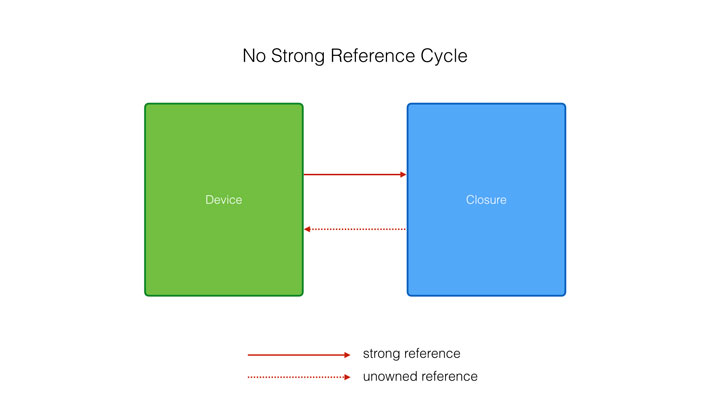 Let's take a look at a few more examples. Reactive programming in Swift heavily relies on closures. To avoid memory leaks caused by strong reference cycles, you need to make sure you understand capture lists and when to use them. In this example, we subscribe to themeSubject and listen for next events. When a next event occurs, we update the tintColor property of the window.

Even though memory management may seem a more advanced topic, it isn't. It is essential that you understand how Automatic Reference Counting works, what the differences are between value types and reference types, and when to use a weak or unowned reference instead of a strong reference.