What Is Any in Swift

by Bart Jacobs in Standard Library

Every now and then, I take some time out of my day to explore something about the Swift language that I don't know yet. There is a lot left to explore. I document my findings in a series I named What The Swift. If you are curious about the more subtle details of the Swift language, then this series is for you.

Get Ready to Play

Open Xcode and and create a new playground. Choose the Blank template from the iOS section. 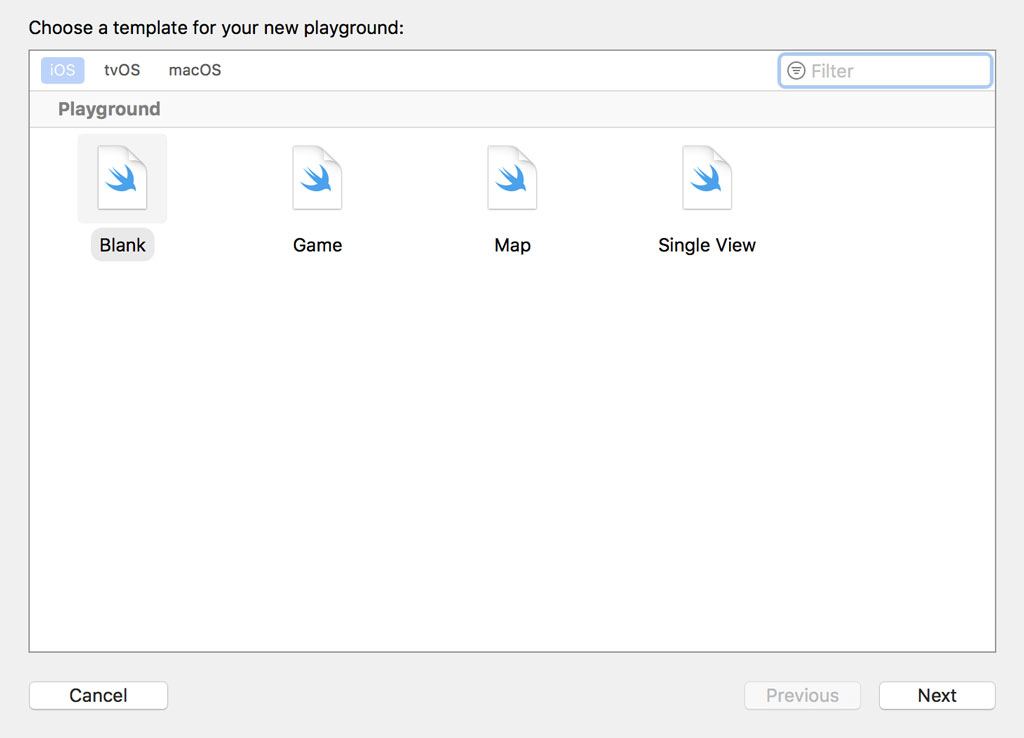 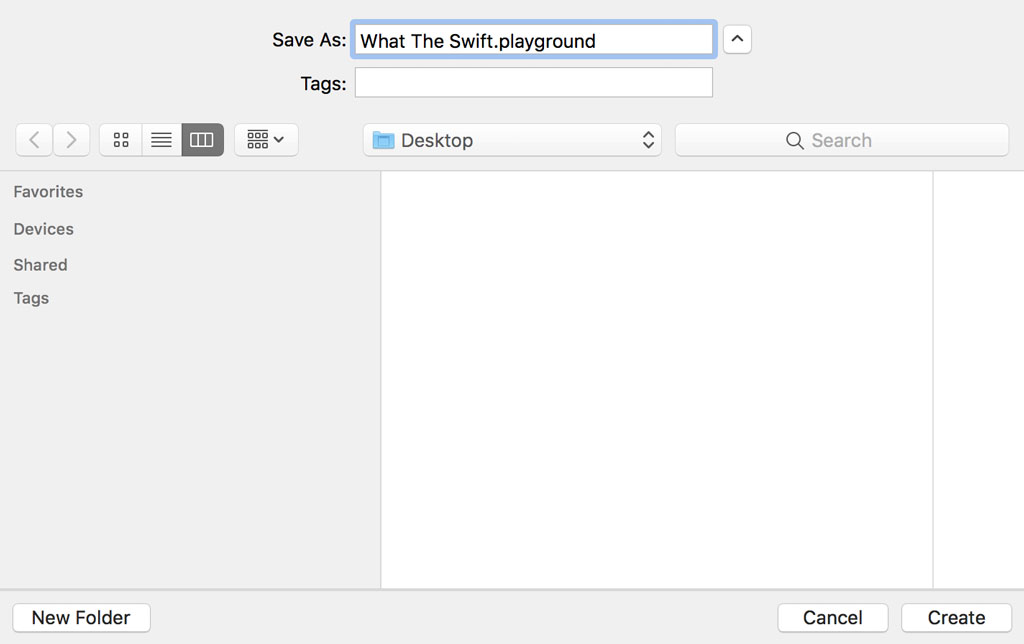 Clear the contents of the playground and declare a variable, myObject, of type Any. 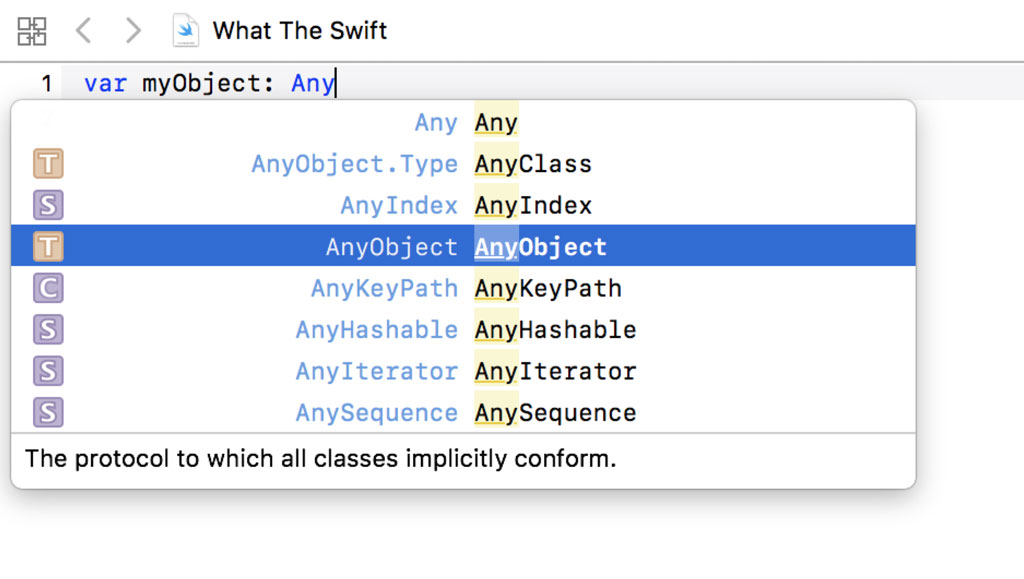 The documentation is vague about the meaning of Any. It looks like we need to dig a bit deeper. 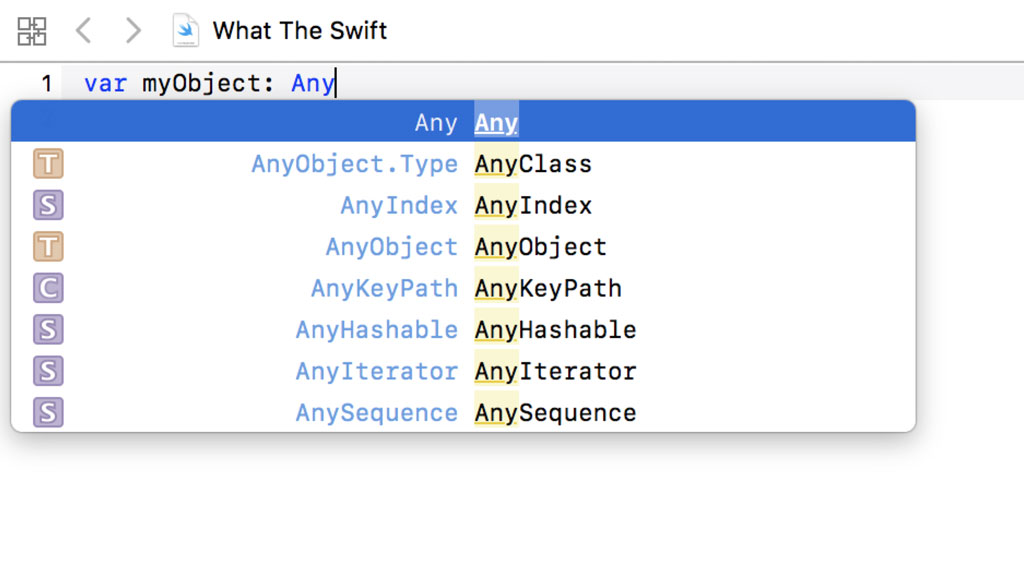 Press Command and click Any in the playground to jump to the definition of Any. This worked fine for AnyObject, but it doesn't seem to work for Any. Does this mean that Any isn't defined in the Swift standard library?

Let's take a look at The Swift Programming Language to find out more about Any. In the chapter titled Type Casting, we find the following.

Any can represent an instance of any type at all, including function types.

That's a start. It tells us that the meaning of Any is broader than that of AnyObject. Any can represent anything hence the name. This also explains why Any isn't a protocol. Even though we know what Any is, I'd like to know more about it. That's the goal of this episode.

A Google search brings us to an article on Apple's Swift blog. The title, Objective-C id as Swift Any, is very telling. The article discusses the meaning of Any and AnyObject. More importantly, it explains that the meaning of AnyObject and Any have changed with the release of Swift 3.

In Swift 3, the id type in Objective-C now maps to the Any type in Swift, which describes a value of any type, whether a class, enum, struct, or any other Swift type.

This change improves the compatibility of Swift and Objective-C. Objective-C collections, for example, can hold elements of Any type as of Swift 3. This means that Foundation's NSArray type can store String, Float, and Int instances.

SE-0116 describes in detail the why and the how of this change. The gist is plain and simple. To improve the compatibility of Objective-C and Swift, Objective-C's id type maps to Swift's Any type.

In Swift 2, id mapped to AnyObject. While this worked fine, it was far from ideal. Not only did it sometimes result in unexpected behavior, the solution didn't do justice to one of Swift's fundamental concepts, value types. Objective-C and Swift are very different if you take a close look at both languages.

The change introduced by SE-0116 means that it should be possible to bridge any Swift type to an Objective-C object. This isn't a problem for classes and bridged value types, such as Int, String, and the collection types defined by the Swift standard library. But there are plenty of value types that don't have an Objective-C counterpart. These value types are bridged as opaque objects, instances of an immutable class. They are opaque because the name and behavior of these classes are not revealed.

But there's one problem. Even though Any can represent an instance of any type, it has its limitations. You probably know that the elements of a set and the keys of a dictionary need to be hashable. They need to conform to the Hashable protocol. A set needs the ability to uniquely identify each of the elements it contains. And to look up the value associated with a given key, a dictionary requires its keys to be unique. The problem is that Any doesn't meet this requirement.

The AnyHashable supertype is used to bring untyped sets and dictionaries from Objective-C to Swift. For example, the userInfo property of Foundation's Notification type is of type [AnyHashable:Any].

Next Episode "What Is Void in Swift"