This is what the Core Data stack currently looks like.

But this can result in threading and performance issues if the main managed object context is used by objects that shouldn't be using it. For example, what happens if an object performs a long-running operation using the main managed object context to fetch data from the persistent store? What happens if the application downloads data in the background and inserts it into the persistent store?

In these scenarios, it's better to create a separate managed object context that operates on a background thread. The Core Data stack we're after looks something like this. 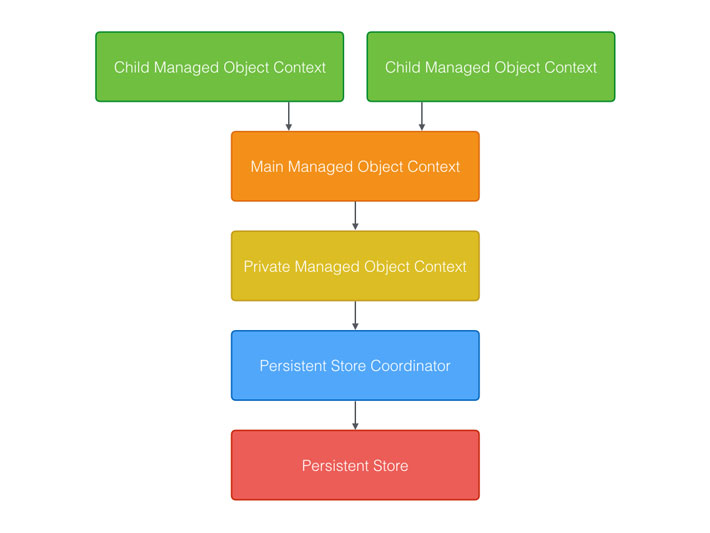 When to Create a Child Managed Object Context

The Operation class is a very useful class of the Foundation framework. It performs a specific task on a background queue. Together with OperationQueue, operations are incredibly useful, flexible, and powerful.

In Samsara, I use a collection of Operation subclasses to query the persistent store for the user's statistics. Every Operation class has its own managed object context, which makes it very easy to encapsulate a specific task in the operation.

This certainly isn't an issue in terms of performance, but it's important to asses the complexity that is added compared to what is gained. I can see the benefits if a complex record or group of records is created or modified.

Adding the ability to instantiate a private managed object context is straightforward thanks to the groundwork we laid in the previous episodes. This is what the implementation looks like.

The implementation is simple. You can further configure the managed object context by setting its merge policy, giving it a name to facilitate debugging, and setting a staleness interval. That's up to you and it depends on the needs of your application.

How would we use a managed object context created with the privateChildManagedObjectContext() method? This is best illustrated by creating an Operation subclass. The subclass I have in mind looks something like this.

How would we use the Task class? In the next example, we instantiate an Task instance and add it to an operation queue.

Even though the CoreDataManager class gained a little in complexity, we now have the ability to create additional, private managed object contexts when needed.

The next episode focuses on another important aspect of working with Core Data in a Cocoa project, accessing the Core Data stack. In that episode, we discuss singletons and dependency injection.

Download Your Free Copy
Next Episode "Passing It Around"