What Is a View

by Bart Jacobs in SwiftUI

A view is the fundamental building block of your application's user interface. You already know that a view is a type that conforms to the View protocol. In this episode, we take a closer look at views and the View protocol.

What Is a View

Don't worry if this is confusing. What you need to remember is that a view conforms to the View protocol and that it needs to implement a computed body property that returns another view.

You already know that a view is required to have a computed body property that returns another view. This may seem odd and recursive. Right? To avoid recursion, some views don't return another view. Those views are primitive views.

The SwiftUI framework defines a broad range of primitive views. Text, for example, doesn't return a view. It draws the string it is given to the screen. Those primitive views are the building blocks you can use in the custom views you create to build your application's user interface.

Any type can conform to the View protocol, but views should lightweight. That is why it is recommended for views to be structs, that is, value types. It is strongly recommended to avoid performing significant work in the view's initializer. In fact, you don't often have a reason to implement a custom initializer since a struct automatically receives a memberwise initializer. Take ContentView as an example. ContentView is a struct that conforms to the View protocol. It is lightweight and inexpensive to create.

The user interface of an application is composed of dozens and dozens of views. That is fine as long as you make sure the views you create are lightweight and inexpensive to create. SwiftUI decides when it creates and destroys views. It performs a range of optimizations to create a user interface that is performant and responsive.

This is one of the most important aspects of SwiftUI to understand and remember. You declare or describe the user interface of your application. SwiftUI takes care of the rest.

You learned in the previous episode that the template of a SwiftUI application doesn't include a controller. While it may be confusing at first, it starts to make sense once you understand what SwiftUI is and how it works.

SwiftUI allows you to describe the dependencies of a view. What does that mean? ContentView displays a static string. Let's make it a bit more dynamic by declaring a property, title of type String.

In the computed body property of ContentView, the value of the title property is passed to the initializer of Text.

We also need to update ContentView.swift. The Content_Previews struct creates the preview for the ContentView struct. We cover previews in more detail later in this series. Pass a string literal to the initializer of ContentView and click the Resume button in the top right to preview the changes we made to ContentView. 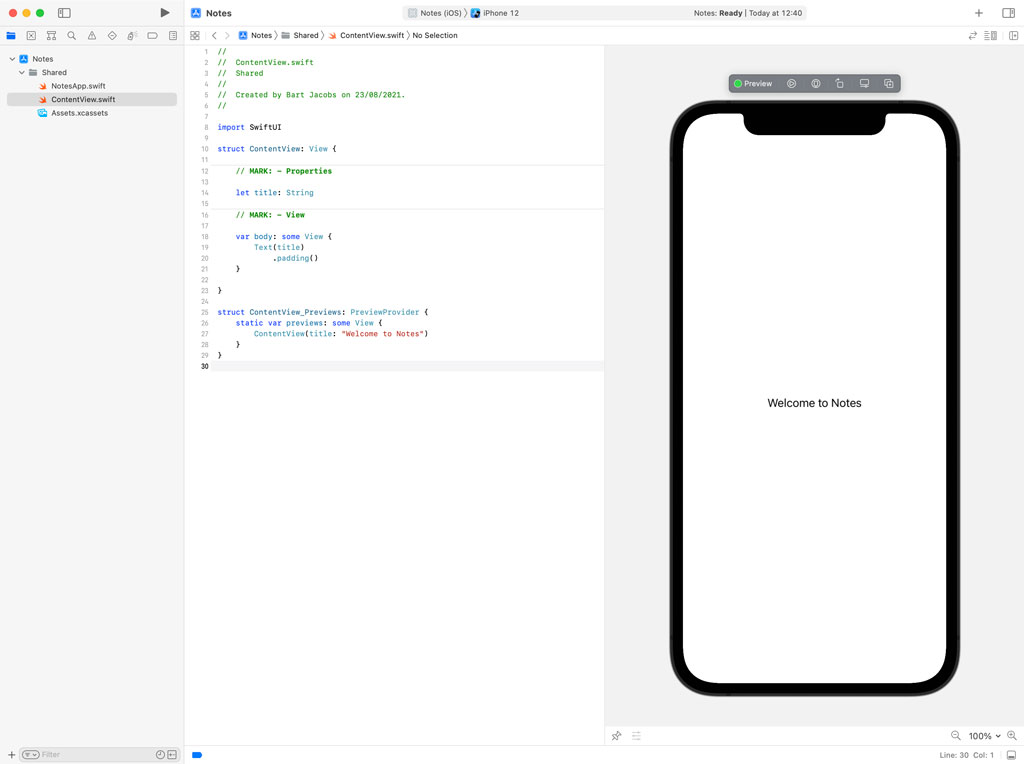 There is another category of views you need to become familiar with, container views. The computed body property of ContentView returns a view. You may be wondering how you build complex user interfaces if a view can only return another view. Container views solve that problem. A container view is a view that contains one or more children. We cover container views in more detail later in this series because they are an indispensable aspect of SwiftUI. Let's take a look at an example.

The compiler doesn't throw an error, but the preview on the right indicates that something isn't quite right. Xcode shows two previews instead of one. The first preview displays Welcome to Notes while the second preview displays A place to organize your notes.

We can solve this problem be embedding the Text instances in a vertical stack, an instance of the VStack struct. Like many other views, the initializer accepts a closure. The closure returns the contents of the vertical stack.

The preview shows the result of this simple change. The Text instances are stacked vertically and we no longer have two previews.

A view is nothing more than a type that conforms to the View protocol. It describes a piece of your application's user interface. While this isn't a difficult concept to grasp, it is very different from what you are used to. UIKit and AppKit take an imperative approach, which is very different from SwiftUI's declarative approach. Don't worry if some concepts we covered in this episode haven't sunk in yet. We take a close look at each of these concepts in this series.

Next Episode "Working with Xcode Previews"