What Are Self-Executing Closures 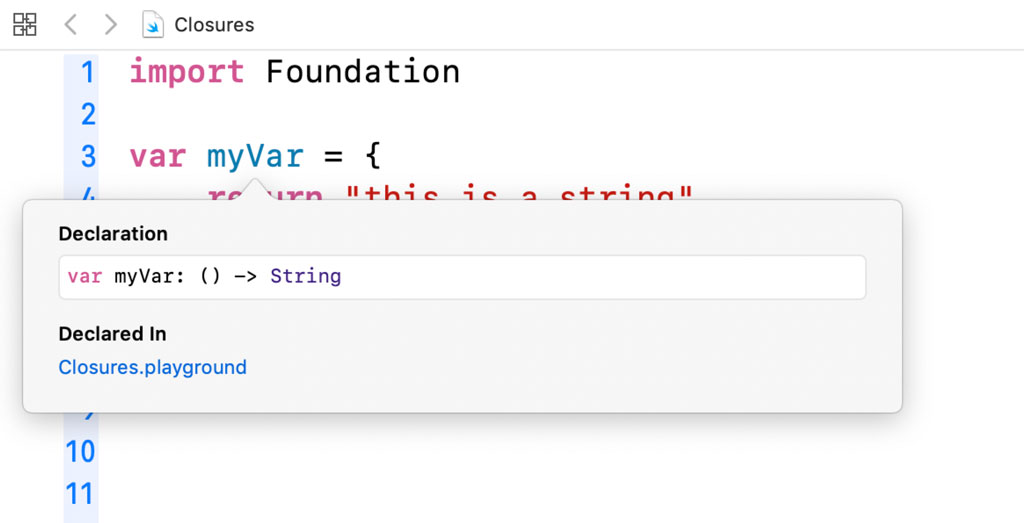 Press Option and click myVar. The type of myVar is no longer a closure, it is now of type String. By appending a pair of parentheses to the closure, the closure is executed and the return value of the closure is assigned to myVar. 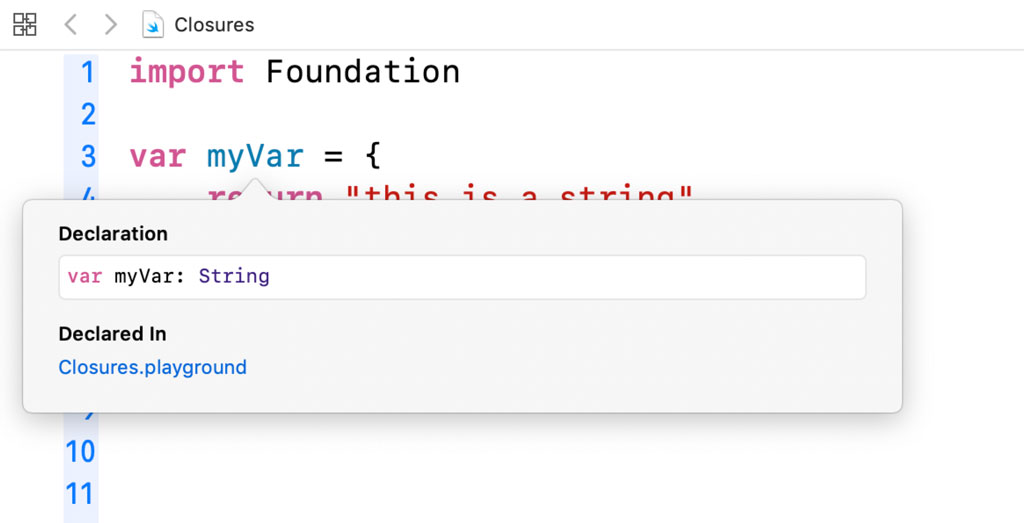 Assigning an initial value to a lazy property is probably the most common use of self-executing closures. This pattern is convenient if the initialization of an object is computationally expensive, requires several lines of code, or needs access to self, the owner of the object. Take a look at this example.

What I like about this pattern is that the initialization and configuration of the table view are encapsulated by the self-executing closure. There's no need to set up the table view in viewDidLoad() or another method. This makes your code readable and easier to understand.

The drawback of a constant property is that you can't access self, the owner of the object, in the self-executing closure. Why is that? When used in combination with a constant property, the self-executing closure is executed during the initialization of the owner of the object instead of after the initialization.

Self-executing closures can be used in a range of scenarios, not only to initialize properties. Take a look at this example.

You probably know that you should use constants over variables whenever possible. If the value of tableViewIsHidden doesn't change, then there's no need to declare it as a variable. Let's see if that is possible.

I like this pattern for several reasons. The obvious benefit is that we replace a variable with a constant. Anyone reading the code implicitly understands that the value of tableViewIsHidden won't change. Another, more subtle, benefit is readability. The body of the closure contains the code that defines the value of the constant. Because we use a constant, we know that its value is defined in the self-executing closure and it won't be modified elsewhere.

Lazy properties are convenient and they are easy to use, but it is important that you know and understand how they can impact the code you write. Lazy properties are not thread safe and for that reason some developers argue that you should only use them when they are needed, not when it's convenient to use them. I can appreciate this argument, but I don't agree. If you understand the risk of using lazy properties, then it's up to you to decide whether it's appropriate to use them.

It is perfectly fine to declare the views of a view controller as lazy properties because you know that these properties should only be accessed from the main thread. This isn't true if you're creating an object that is accessed by a range of different objects from different threads. In that scenario, you either implement a threading strategy that prevents threading issues or you don't declare the property as lazy. I recommend keeping it simple and avoid lazy properties in the latter scenario. Debugging threading issues isn't something most developers do for fun. I always try to keep code as simple as possible if I know that threading issues are a potential risk.

Keep in mind that lazy properties need to be declared as variables and that implies that they can be modified. That is a considerable drawback in my opinion. You can work around this by correctly applying access control modifiers. If no other objects need access to a lazy property, then apply the private or fileprivate modifier to lock down access.

Next Episode "Five Simple Tips to Improve the Code You Write"