What Is Automatic Reference Counting (ARC)

Before we can discuss Automatic Reference Counting, ARC for short, you need to understand the differences between value types and reference types.

You are probably already familiar with classes. Most object-oriented programming languages, such as Ruby, PHP, C#, and Java, define classes. Unless you have experience with C or Objective-C, structures may be new to you.

Even though classes and structures are similar, they differ in a number of key aspects. The difference I would like to focus on today is how they are stored in memory.

I won't explain in detail what separates classes and structures. In this episode, we explore how classes and structures differ in the context of memory management. While this may sound like an advanced topic, it certainly isn't. It is essential that you understand how value types and reference types behave in Swift.

Structures are an integral part of the Swift programming language. Even if you are new to Swift, chances are that you have already been using structures. Fire up Xcode and create a playground by choosing the Blank template from the iOS > Playground section.

This is what a playground looks like in Xcode if you choose the Blank template, an import statement for the UIKit framework at the top and a variable declaration. Rename variable str to string1.

The variable string1 is of type String. In Swift, strings are structures. Press Option, click the string1 variable, and click the String symbol to bring up Xcode's documentation browser. 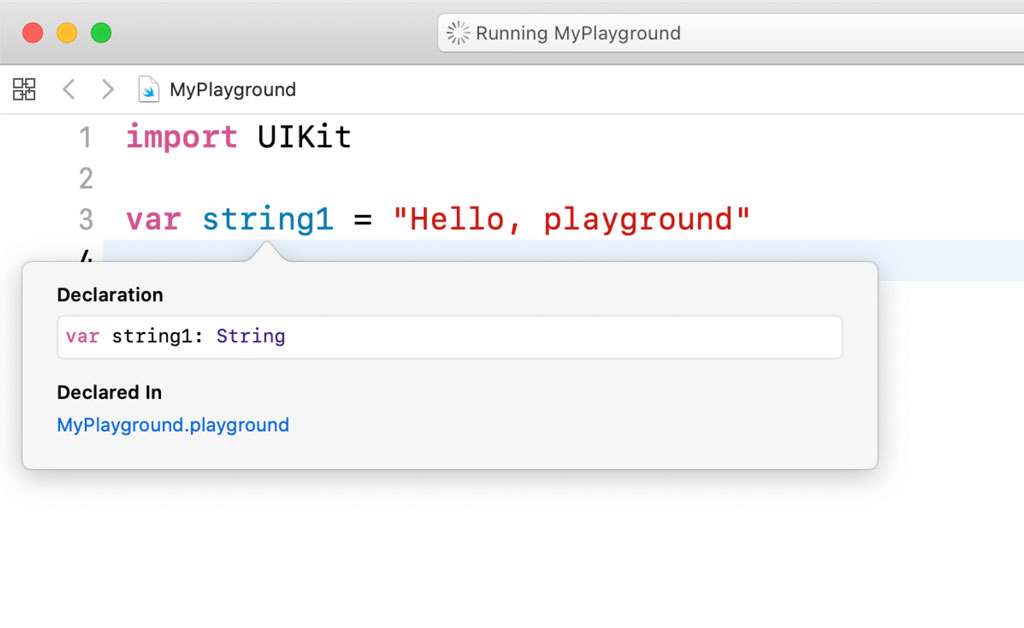 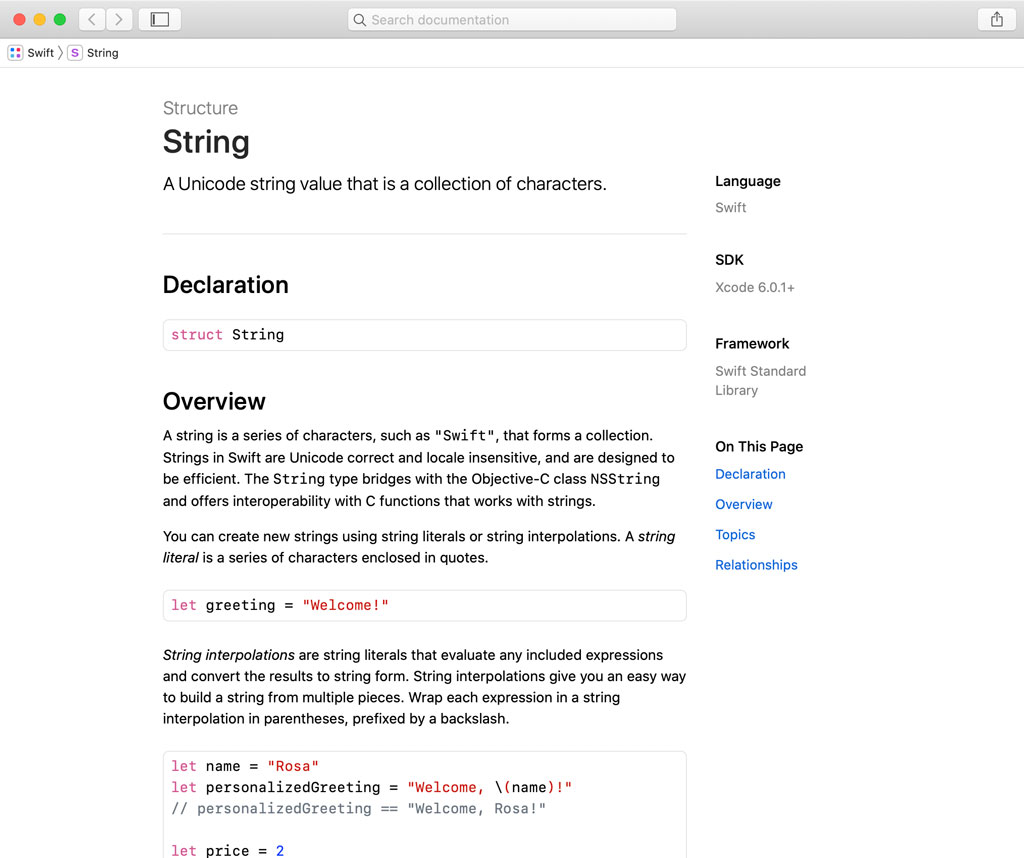 As you can see at the top, String is a structure. What does that mean? And why is it important for this discussion? Instances of structures and enumerations are passed by value. What that means is best illustrated with an example.

What Does Passing by Value Mean?

Let's declare a second variable, string2, and assign the value of string1 to the new variable.

What happens if we assign a new value to string1. Below the if statement, modify the value stored in string1.

What do you expect the value stored in string2 is? Move the if statement you added a moment ago below the assignment of string1. This is what the playground should look like.

Are you surprised by the result you see in the results panel on the right? I repeat what I mentioned earlier. Instances of structures and enumerations are passed by value. Let me explain what this means using the playground.

What Does Passing by Reference Mean?

Don't worry if it doesn't click yet. The next example should fill in any remaining gaps. Clear the playground and define a class named Person. Don't worry about the syntax if you are new to Swift.

Let's create an instance of the Person class and output the values stored in its first and last properties.

We now declare a second constant, jane, and assign the value stored in jim to jane. It should be no surprise that the values stored in the first and last properties of jane are equal to those of jim.

Observe what happens if we modify the first name of Jane. Are you surprised by the result?

The value stored in the first property of jim is also modified. Why is that? Instances of classes are passed by reference. When we assigned jim to jane, the value stored in jim was not copied. Instead, the reference of the Person instance stored in jim was assigned to jane. This means that jim and jane are pointing to the same Person instance. Only one instance of the Person class is present in memory.

It is essential that an object, an instance of a class, structure, or enumeration, is deallocated when it is no longer needed. When an object is deallocated, the memory occupied by the object is freed. This is instrumental for the performance and efficiency of the system.

Because class instances are passed by reference, it is possible for properties, constants, and variables to keep a reference to the same class instance. This is a key aspect of object-oriented programming. This is incredibly useful, but it makes it difficult for the compiler to know and understand when it is safe to deallocate a class instance.

The idea underlying ARC is simple. It keeps track of class instances and it decides when it is safe to deallocate the class instances it monitors. It does this by counting the references of each class instance. Let me illustrate this with an example.

We define a class, Device. The class has two properties of type String, model and manufacturer. We can initialize an instance of the Device class by invoking the init(model:manufacturer:) initializer.

Before we create an instance of the Device class, we declare two variables of type Device?.

You can verify this by adding a deinitializer to the Device class. The deinitializer function of a class is invoked immediately before an instance of the class is deallocated. It gives the instance an opportunity to clean up any resources it has used during its lifetime. 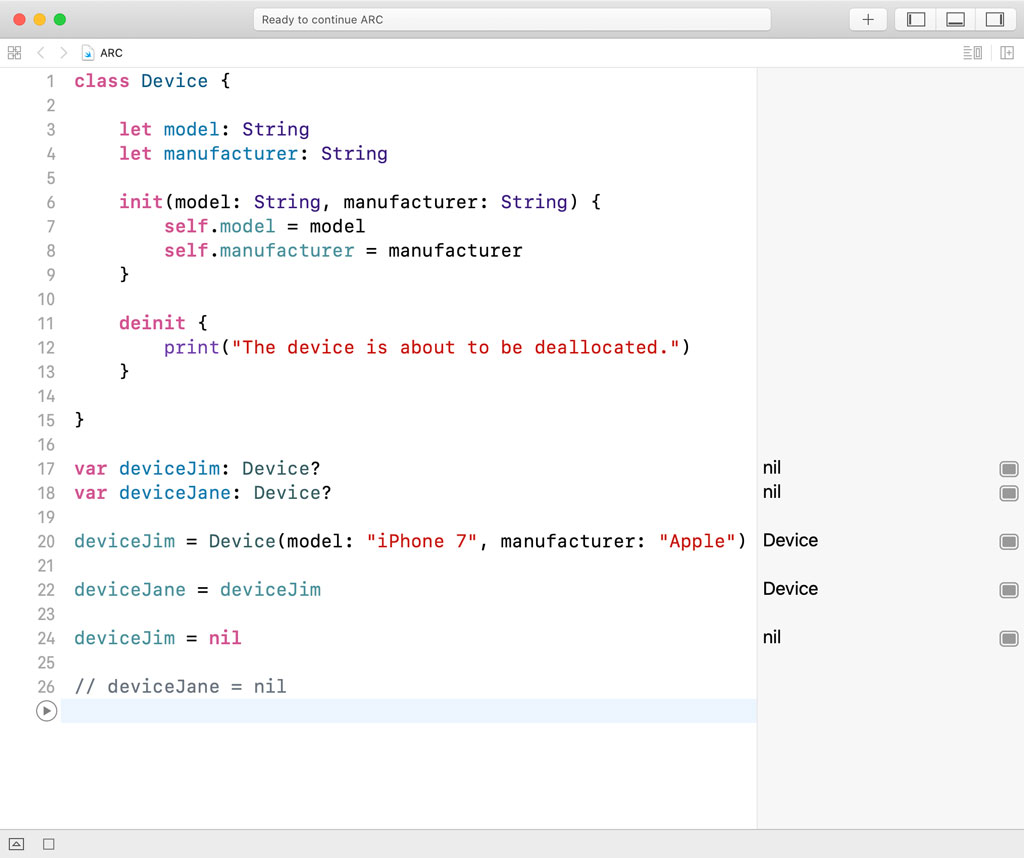 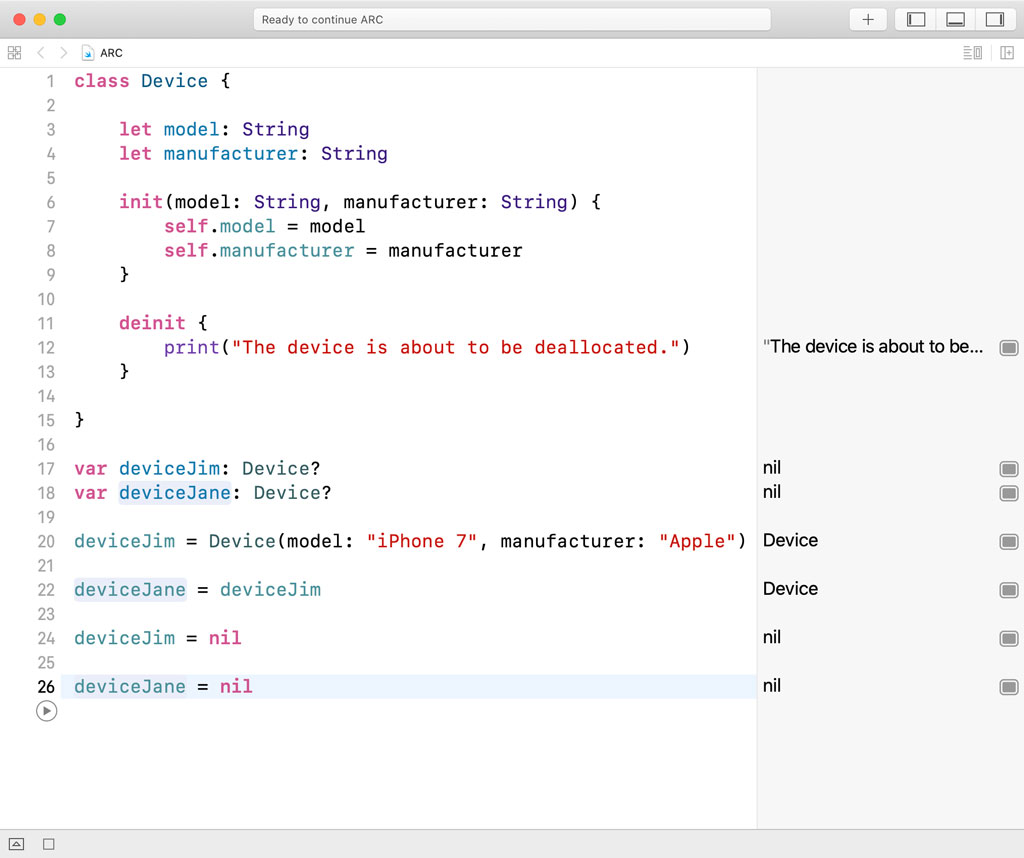 Next Episode "What Are Strong Reference Cycles"